The nature of the collection and the Kennedys

One of the most influential foundations of archival practice that I learned early on in my education is the idea of “original order.” Original order is based on the idea that throughout the course of a person’s daily life, their records (and in this case, photographs), acquire an organization, or “order” from which researchers, historians and archivists can derive meaning and insight. For example, when looking at a pile of papers on a desk, the most recent, used or important tend to be at the top of the pile because they are used regularly, referred to often, or recently written. While there are many other nuances to the idea of original order, and how it should be interpreted, this is a simple example what it may mean for a specific instance.

Now granted, this concept has been interpreted many different ways, and is undergoing an evolution, even as we speak, in the archival world. Original order, though the ideal, is not realistic in a world where archives are donated and handled by different parties, aside from the creator, often after the creators death, and can sometimes change hands from one repository or archive to another. Original order is easily lost throughout the processing of the archives. And this is not to mention the idea that each creator of an archive may have different habits and practices when they create and use their records. Can we derive the same meaning from a pile of paper, regardless if the person is neat or messy, left handed or right handed, and so forth?

The reason I’m writing about original order today is because the original order of the Rolland J. Curtis collection has been lost. Through the changing of hands and storage, the photographs which I assume were originally arranged by the event Curtis was shooting, has been completely reorganized. The result is an alphabetical arrangement of the photos by the people in the photo.

While this is great for identification purposes, from an archival standpoint, this becomes problematic, for several reasons. First, if there were multiple people in the photos, photos taken at a party for instance, the entire event was split up and dispersed among the photograph’s subjects. If there were 5 people in the picture, the photographs were distributed into 5 separate piles, and then each pile was filed by one of the people’s names. There is no record of how the photographs were split up, so it’s very difficult to determine what the “original order” was for the photographs. To complicate matters, the photographs of people, regardless of the event, were all combined together and filed under the person’s name. Basically, every single photograph of the person in the entire collection, comprising what we estimate is 14-20,000 photos and negatives, was separated from the groups of events, and combined together with photographs of the person from other events, and filed under the person’s name.

The result is what I like to call “the most epic game of memory.” While I am processing the photos, I try to remember specific details about the photos, like clothing, furniture, wallpaper, setting, and people. The goal is to match up photographs that were taken at the same event, in an effort to recreate the original arrangement and grouping of the photos. While I understand that I may not ever be able to recreate the original order perfectly, at least making an attempt will help the context of the photos and our ability to understand them.

After successfully grouping the photographs together by the event, the next challenge is to figure out the event that the photograph captures. This is an equally challenging task because Curtis doesn’t appear to have written records of the events in the photographs, so we rely on research and information written on the photos by the first person who processed the collection. I’ve also been searching through the Los Angeles newspaper archives, specifically the Los Angeles Times and the Los Angeles Sentinel.

These photos of Ted Kennedy provide great clues as to the event. Kennedy is at the Biltmore Hotel in Los Angeles. He is speaking behind a picture of Lyndon B Johnson, possibly because he is campaigning for him. To his right is a picture of John F. Kennedy, which may place the date of the picture after his assassination in 1963.

In the case of the photographs of Robert Kennedy, the LAPL’s online photo collection was quite helpful. The photograph below was one of the photographs Curtis took during Kennedy’s presidential campaign in Los Angeles. This photograph would be a challenge to identify on its own. Though I can identify many people in the photos, the location, date, and time of the photo is not discernible. However, a search through the LAPL’s photo collection yielded a similar photo taken by a newspaper, complete with date, time, and information on the event. This particular photo was taken on the way to Kennedy’s speech at the Watts Writers Workshop, which was established after the 1965 Watts riot. 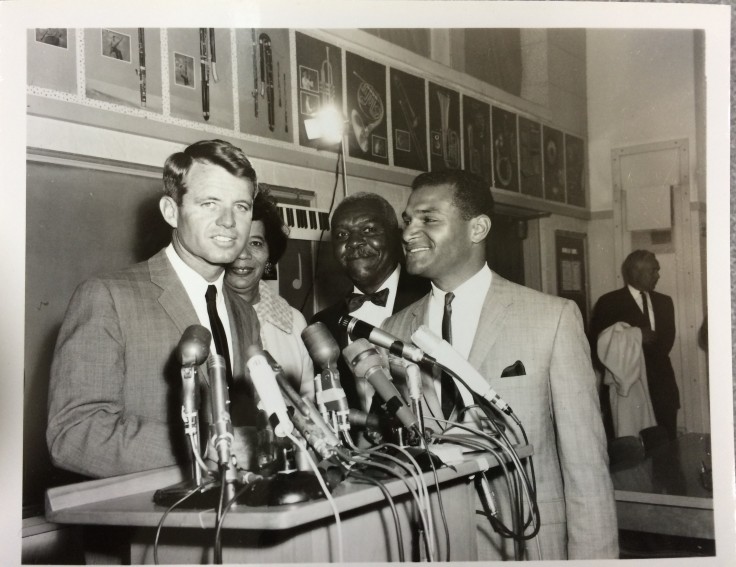 The same was the case for this photo, which was taken in a school during what appears to be a press conference. We don’t know what the name of the school is, or why Kennedy was speaking there, but we can identify Councilman Billy Mills next to him. The LAPL photo collection had a photo from a newspaper at the same time with information chronicling the date, time, and the reason why. Kennedy was speaking at Markham Junior High School in South Los Angeles in 1964 during a tour of the city, years before he began campaigning for president.